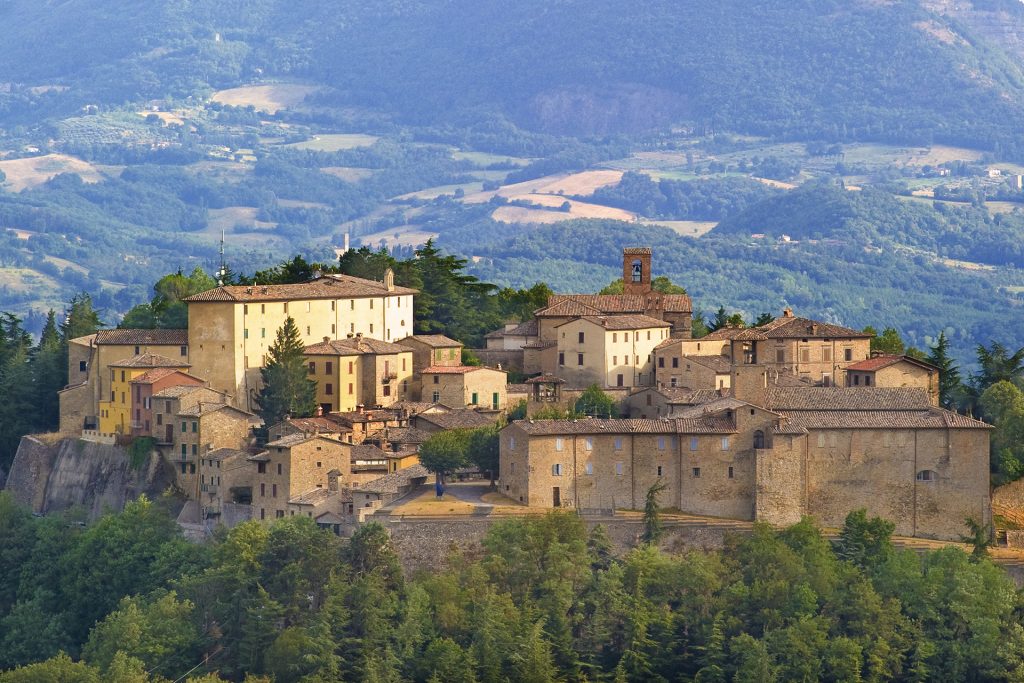 Even if autumn is almost upon us, the days get shorter and everything slowly starts again, nothing prevents us from enjoying a few more days of welldeserved vacation or even giving ourselves an alternative weekend. This is my favourite time of year, because September and October are the months of unique atmospheres; the still pleasant temperatures allow you to stay outdoors in close contact with nature, avoiding the crowds of the summer months, the ideal season to recharge your batteries.

Very often it happens that upon your arrival, you immediately have the desire to immerse yourself in the atmosphere of this magical land and so, once your suitcases has been unpacked, you are ready to leave. So, since time is precious, I would advise you to treat yourself to a day in Montone. A quarter of an hour by car from Agriturismo Ampugnano and it will appear in all its splendour, set among the rolling Umbrian hills and thick oak woods.

Montone is a small fortified medieval village of the 10th century, built in the shape of an ellipse on a hill overlooking the Upper Tiber Valley, located between the towns of Città di Castello and Umbertide; a village with splendid characteristics considered one of the 20 most beautiful villages in Italy in 2020.
Surrounded by high walls that in the past protected its inhabitants from possible enemy attacks, to access the small village the only way is through the three gates of Verziere, of Borgo Vecchio and Del Monte, which correspond to its three districts.

Walking through the alleys you will be fascinated by the beauties it hides and walking through the internal streets you can admire historic houses adorned with geraniums, splendid churches and squares where time seems to have stopped.

Here history and nature meet and merge to give life to wonderful views and you will surely want to immortalize them with a photo shoot. And if you like, you can always post them on the Facebook page “Umbria una foto al giorno” and share your shots with friends on our page. Montone is the homeland of the mercenary captain Braccio Fortebracci , born into a local noble family. The son, Carlo Fortebracci, count of Montone and leader in the service of the Serenissima Republic of Venice in 1473 defeated the Turks and as a prize, according to tradition, received a Thorn from the Crown of Christ, which he brought as a gift to Montone. Legend has it that the Thorn blossomed on Good Friday giving off a very sweet perfume.

From that day, on Easter Monday, the Rievocazione della Santa Spina (reenactment of the Holy Thorn) is celebrated in Montone during which the rite of exposition is performed. The same ritual is repeated in August where the three districts of the village for a week, in a medieval atmosphere, challenge each other for the race for the Palio and the election of their own Castellana, a representative figure of Margherita Malatesta, wife of Count Carlo Fortebracci. In the evening, the inhabitants of Montone, rigorously dressed in medieval costume, will be ready to welcome you in one of the town’s taverns, one per district, to accompany you on a tour of flavours of typical traditional dishes.

In the second week of July the Umbria Film Festival takes place in Montone, an evocative film review, born as a moment of sharing and meeting through cinema.

The Festival has been held since 1997 thanks to the collaboration between the Umbria Film Festival Association, the Municipality of Montone (PG) and the Riverside Studios in London. The screenings are free and give rise to cultural debates between celebrities, directors, internationally renowned actors and film lovers. Gather in the town square, the meeting place par excellence. Every evening the festival offers the screening of a series of “children’s shorts” followed by a “feature film”: a spectacular program with international previews of films and shorts, exhibitions, debates, round tables and meetings. In recent years there have been over 100 premieres, almost 500 animated shorts, over 50 collateral events related to cinema (seminars, courses, round tables, master classes, exhibitions, concerts), almost 100 works by young film makers and over 50 protagonists of international cinema.

There are many opportunities during the year to fully experience Montone.

At the turn of the months of October and November, for the bank holiday of All Saints, the small village organizes the “Festa del Bosco”, a market exhibition of forest and undergrowth products that involves many exhibitors in the area. The exhibition animates the alleys and squares of the town and the cellars of the houses, only for this occasion, are opened and decorated with the fruits and colours of autumn, a festive and very suggestive atmosphere. Stalls of honey, cheeses, jams, chocolate, forgotten fruits such as jujubes, flowers, crafts in wrought iron and wood, and much more. In addition, during the days of the festival, various types of attractions will animate the village of Montone: performance of various traveling musical groups throughout the village, roasted chestnuts, concerts, initiatives and shows for children, walks in the woods to discover castles and historical paths, horse rides, themed conferences, book presentations.

Montone also means “nature”; in fact, it offers various routes for trekking and horseback riding along the “Via dei Mulini“, between valleys covered by dense forests of Cerro and Roverella interspersed with springs and clear waters. If you want to spend a few hours in close contact with nature, at the gates of Montone there is a small riding school surrounded by nature, quiet and familiar that offers horseback riding tours and riding lessons even for the little ones. I took my children for some time when they were little and I must say it was a very fun experience. Rita is a very nice and easy-going person, and she will welcome you alongside her horses all very meek and calm, which she takes care of with great love and passion.

And to end the day spent strolling through the narrow streets and characteristic corners of Montone, it would not be bad to stop in one of the many characteristic restaurants of the small village. You can find the one that suits you best: from the rustic restaurant with homemade dishes to the more refined one with revisited traditional dishes.

So what are you waiting for to pack your suitcase!