Are you looking for a spiritual, artistic, literary Umbria? Here are the places to see 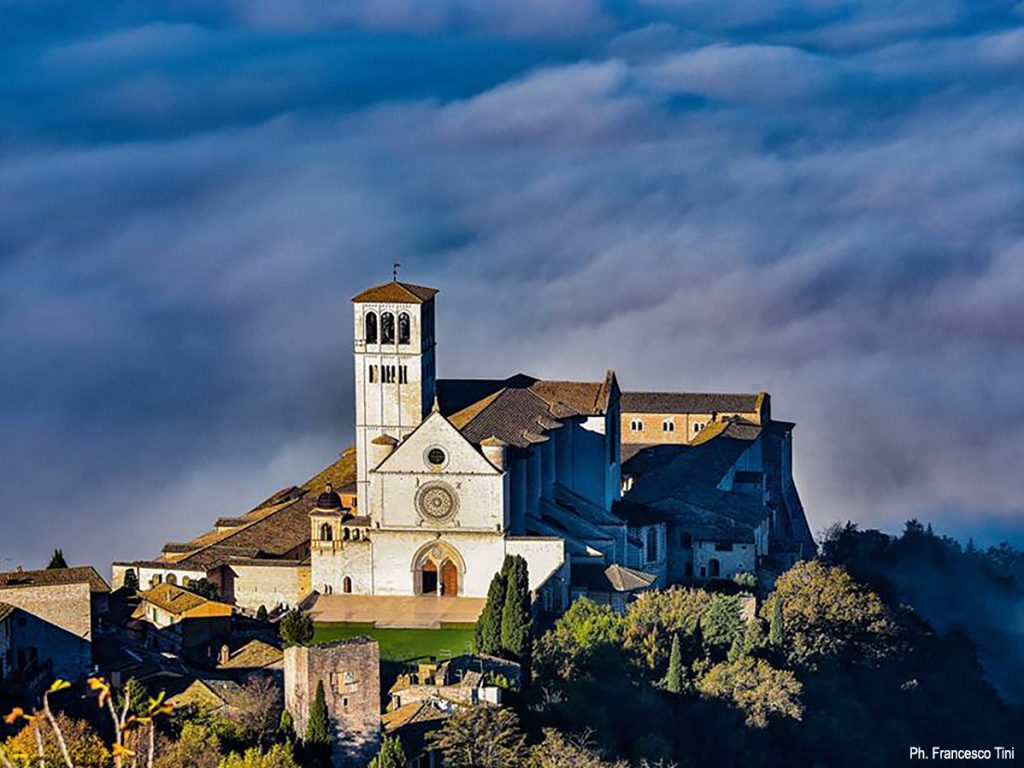 Umbria is a small region located in the heart of central Italy, full of places to visit. Here spirituality and culture coexist in harmony between past, present and future. Get ready, this land of a thousand faces will enchant you!

Umbria is home to great saints, whose lives are united by simplicity.St. Francis, the poor man of Assisi, stripped himself of his possessions to follow the faith and live in harmony with creation. Nature and Umbria peep into works and key moments of his existence: the “Canticle of the Creatures“, a beautiful poem in the vernacular, praising all the elements. The Piandarca area (between Cannara and Bevagna), famous for his preaching to birds, is now the destination of a short trekking path. The meeting with a she-wolf in Gubbio, who was allegedly tamed by the Saint. In support of this legend, in the Church of San Francesco della Pace (Gubbio) a small tomb was found that would have housed the remains of the animal.

St. Clare, another young woman from Assisi, followed the example of Francis and abandoned all her earthly goods to live in prayer. She spent her life in the Sanctuary of San Damiano with the other sisters according to the rule she wrote, enjoying a single privilege: poverty.

And again, Santa Rita da Cascia, patroness of impossible cases. Many symbols linked to her cult come from nature: the rose, a symbol of new flowering; bees, emblem of industriousness and commitment to others; the vine, a sign of obedience. Her sanctuary is a destination for religious tourism and brides: the wedding dresses donated to the monastery can be taken for free and worn again to go to the altar.

St. Benedict of Norcia, after years of living as a hermit, founded thirteen monasteries led by the ora et labora rule (pray and work). Many practical activities were in contact with the earth: together with the other monks, he recovered land, cultivated fields and orchards.

One of the most famous Umbrian Renaissance painters is Pietro Vannucci, known as the Perugino: he was a pupil of Piero della Francesca and Verrocchio (together with companions of the calibre of Botticelli and Leonardo Da Vinci) and teacher of Raphael. It is possible to admire some of his emblematic works in the National Gallery of Umbria.

Then there is Pinturicchio, author of a splendid cycle of frescoes: “Stories of Mary and the childhood of Jesus” for the Baglioni Chapel in the Church of Santa Maria Maggiore in Spello.

In their works, the landscape changes: at times it is vague, made up of soft shapes and colours, at others a means for the perspective rendering that combines natural and architectural elements.

Taking a leap forward into the twentieth century, Alberto Burri explores the possibilities of matter with combustions, sacks and cracks. Many of his cycles of works are preserved inside the Ex Seccatoi del Tabacco, a structure just outside Città di Castello (his hometown). It was bought by the artist himself and converted into a museum by the Palazzo Albizzini Foundation.

Gerardo Dottori gives the futurist movement a great contribution with its Aeropittura ,  depicting from above mystic natural landscapes that are very reminiscent of the Umbrian views. A permanent collection of his works is housed in Palazzo della Penna, a centre for contemporary art in the heart of Perugia.

Less known, but equally important for his artistic research, Brajo Fuso inserts everyday objects and waste materials into his works. He experiments with techniques that recall Pollock (dripping), Gaudì (ceramic and mortar mosaics), Calder (mobile sculptures). More than a museum, the Fuseum (in Montemalbe , Perugia) is a home for his works and a place open to all forms of art.

Even literature can make us discover beautiful things to see in Umbria. The sources of Clitunno, in Campello (where the Tempietto declared a World Heritage Site by Unesco stands) were sung by Virgilio, Giosuè Carducci and Lord Byron. The British poet also dedicated verses to two other bodies of water: Lake Trasimeno and the Cascate delle Marmore.

Hermann Hesse describes in words full of wonder the view from the terrace of the Palazzo dei Consoli at Gubbio, the churches and panoramas of Montefalco. Of Spoleto he admires the natural beauties, while Goethe appreciates the Roman architectural works, especially the Ponte delle Torri. The author of the famous “Journey to Italy” is also fascinated by the Church of Santa Maria sopra Minerva in Assisi, a harmonious fusion of pagan and Christian elements.